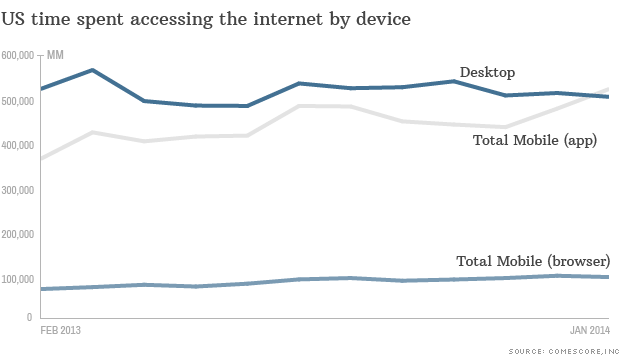 Americans used smartphone and tablet apps more than PCs to access the Internet last month — the first time that has ever happened.

Mobile devices accounted for 55% of Internet usage in the United States in January. Apps made up 47% of Internet traffic and 8% of traffic came from mobile browsers, according to data from comScore, cited Thursday by research firm Enders Analysis. PCs clocked in at 45%.

Although total Internet usage on mobile devices has previously exceeded that on PCs, this is the first time it’s happened for app usage alone.

The shift follows a freefall in PC sales, which suffered their worst decline in history last year.

As of January, 55% of American adults had smartphones, while 42% owned tablets,according to the Pew Research Center.

Get a free website and internet marketing audit report

Send us a message